Master Inventor and Chief Technology Officer for IBM UK, Andy Stanford-Clark was one of the co-inventors of MQTT, the communication protocol that drives Facebook Messenger.

Andy Stanford-Clark, or Andy SC to his friends and colleagues, works at the dizzy heights of Chief Technology Officer at an already very technical company, IBM UK.

Amazingly he manages to carry out this high-powered role while living in a 16th Century cottage on the south side of the Isle of Wight - thanks in no small part to the power that ubiquitous broadband brings to every corner of the Island.

Mind blowing
Before we get into the details of Andy’s many achievements, let us just drop this mind-blowing fact on you - he co-created something called MQTT.

While you probably don’t know what the jumble of letters is (not many do), it’s highly likely that you, or your relatives or friends, are using it on a daily basis without even knowing, of its Isle of Wight connection.

MQTT has many uses - but just one of those is at Facebook. It’s the messaging protocol that underlies every message sent on Facebook Messenger - currently that’s 1.3 BILLION people across the globe using it! Yup - that’s Billion.

Why a Hero?
We picked Andy SC as a Hidden Hero because we felt he’s a modern example of one of the consistent threads that weaves through the Isle of Wight Hidden Heroes - achieving remarkable things by taking a unique, pioneering approach to solve a problem. In short, Thinking Differently.

MQTT is just one thing that Andy has done, help him earn his IBM title of Master Inventor. Unsurprisingly with that on his business card, he’s quite an inventor, with more than 40 Patents to his name.

Internet of Things (IoT)
These days he specialises in the Internet of Things (IoT) - putting sensors and tiny computers in pretty much everything, and having them chat away to the wider world about what they're up to. This might be a mousetrap to announce that it’s caught a mouse so needs to be reset, as he has in his house on the Isle of Wight, or sensors in a car that send information about wear-and-tear back to the manufacturer, so they can help make sure it doesn’t break down. The potential is huge.

An early start
Andy’s passion for ingenious solutions to everyday, real-world problems started at an early age. Way back when he was only eight years old he built some electronic circuitry for his Mum, to detect when it was raining and then sound an alarm, so she could get the washing in off the line.

Guinness World record
From that early start Andy has gone on to achieve remarkable things in technology - too many to mention, so here are a couple more highlights:

More on MQTT
A few years later came MQTT, originally designed to be used in the oil and gas industries for monitoring their pipelines.

A simple summary of how it works - you tell MQTT something, it then tells everyone who is interested about that thing. Using Facebook Messenger as an example, you might write “Look at this cat video. LOL!”, MQTT would then, near instantly, pass this out to everyone in your group chat - be that two or two million people.

We asked Andy what he thought were the secrets of MQTT’s remarkable success?

It's now an international ISO standard. Understandably Andy is "Hugely proud of it".

MQTT underlies the work that he and many others now do with the Internet of Things.

Vision for the Island
Andy's vision for the Isle of Wight is a concerted effort to encourage lots of start-up companies to be formed on the Island - requiring a diverse range of skills. He hopes this will really help the young people of the Island to grow their ideas here, rather than feel they have to move to the Mainland.

Find out more
Find out more about Andy Stanford Clark at the Quay Arts Exhibition between 10th February - 24th March 2018.

Find out more
Find out more about Andy Stanford Clark at the Quay Arts Exhibition between 10th February - 24th March 2018. 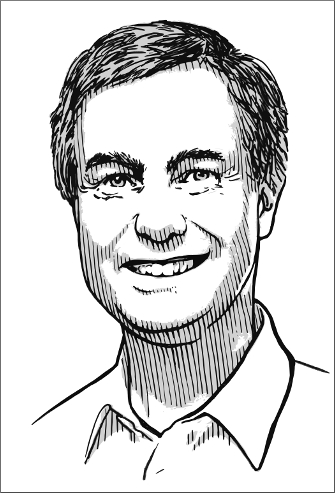