Ron Wheeler nominates the Harris family - innovative and prolific Studio Glass makers who put the Island and country on the world map.

This is a brief story of how a family, of the most innovative and prolific exponents of Studio Glass-making, has helped propel this country to the top of the world glass-making tree.

Namely Michael Harris and his two sons, Timothy, the eldest and his younger brother Jonathan, also helped in no small part by Michael’s widow, Elizabeth, and now supported by Richard (Michael’s younger bother) to form ‘The Harris Dynasty of British Studio Glass Makers’.

The birth of Studio Glass
Up until the early 1960s, glass making was a somewhat staid and classic process to produce useful objects. Then an American ceramicist called Harvey Littleton explored the possibility to produce a mix of glass that would enable one man in a studio to produce objects, useful and decorative, on his own or with one or two assistants rather than as a factory-based multiple operative system required to complete one item as was, up until then, the norm.

Eventually with experimenting, successes came and he tutored several keen followers in this new Studio Glass making process. One of these early students, Samuel Herman, was invited on a scholarship to come to the RCA in 1967, where Michael Harris was the head of the Industrial Glass Design department and he showed Michael what had been achieved.

Forced to leave Malta
This product, called by Michael ‘Mdina Glass’, had considerable success on a world wide scale through careful and extensive marketing.

However eventually Michael was forced to leave Malta by the new Nationalist government in 1972, as were all semblances of British influence, and he decided to try to repeat this success on an island with similar characteristics.

He chose the Isle of Wight and so the Studio was founded in 1973 in a beautiful site at St. Lawrence.

Following a not-dissimilar range of designs and colours as were so successful at Mdina Glass, another breakthrough came in 1977. Michael made contact with his previous colleagues at the RCA and set up a competition for students to suggest a design that was new and radical, which could be produced commercially by the Studio Glass process.

Glass-making stardom
So was born a design which utilised Gold and Silver on the surface of black glass. Called eventually ‘Black Azurene’ it became the most successful design in studio glass that the world had ever seen and this propelled Michael and his studio and team, which now included his talented eldest glass-making son, Timothy, into glass-making stardom.

Eventually selling in enormous quantity to over 30 countries worldwide and selling to almost every major store in most major cities across the globe.

In the succeeding years of the immense success of the studio, a great volume of designs and processes have sprung from the fertile minds of the remaining family members, even after the sad demise of Michael in 1994.

Unique designs
Hot glass designs from Timothy and cold glass designs from his brother, Jonathan, as well as unique glass sculptural pictures from their mother Elizabeth. Many of these designs have incorporated some of the highest echelons of the glass-makers art of Cameo and a process known as ‘Graal’ and also of Incalmo, many of which included the now flagship process of adding 22ct gold and sterling silver to the surface of the pieces.

The Harris Dynasty seems to know no bounds.

It is praise enough to point out that from prestigious awards such as the Queen Elizabeth Scholarship Trust (QEST) in 1990, as well as a special piece of Cameo given to the Queen Mother for her 90th birthday.

Then a special gift presentation of one of his most successful designs called ‘Seascape’ to her Majesty Queen Elizabeth ll as a gift from the people of the Island Island in her Jubilee year of 2012 on Cowes seafront during her visit.

Immense, but largely hidden talent
Timothy has increasingly pushed the boundaries of his universally appealing art as he has proved time and time again with a multitude of innovative techniques and finishes.

These have undoubtedly set him alongside the very best in British, and indeed global studio glass production, demonstrating his immense, but largely hidden, talent for innovative Studio Glass design.

Innovative and prolific
During 2013 the Studio relocated to new state of the art premises at Arreton Barns Craft Village under the ownership of another Harris family member ~ Richard Harris, Timothy’s uncle and Michael's younger brother, where it continues production of one of the world’s great studio glass products.

The continuation of this tradition of excellence of design and production is driven, as it has been for many a year, by Timothy Harris, one of the Island’s ‘Hidden Heroes' – supported by his team, his mother Elizabeth and the new owner, Richard Harris.

Timothy is recognised as one of Britain’s most innovative and prolific designers and makers of Studio Glass and ranks amongst the best on a world stage.

About the author
As a freelance marketing agent, I had the pleasure of working with Michael and the Studio, covering sales over the South West of England from 1980 up until his untimely death, when Timothy, Jonathan and Elizabeth took over control of the Studio.

I still work very closely with the Studio and now represent them as their Appointed Secondary Market Specialist with my wife, Ann, trading as Artius Glass.

It is now, as it always has been an honour and privilege to be a part of such a worldwide success story. And long may it last. I will certainly do my bit to maintain that success as far as I can.

The studio is open daily and has an excellent viewing area where you can watch this very special glass being created by Timothy Harris and his assistants. 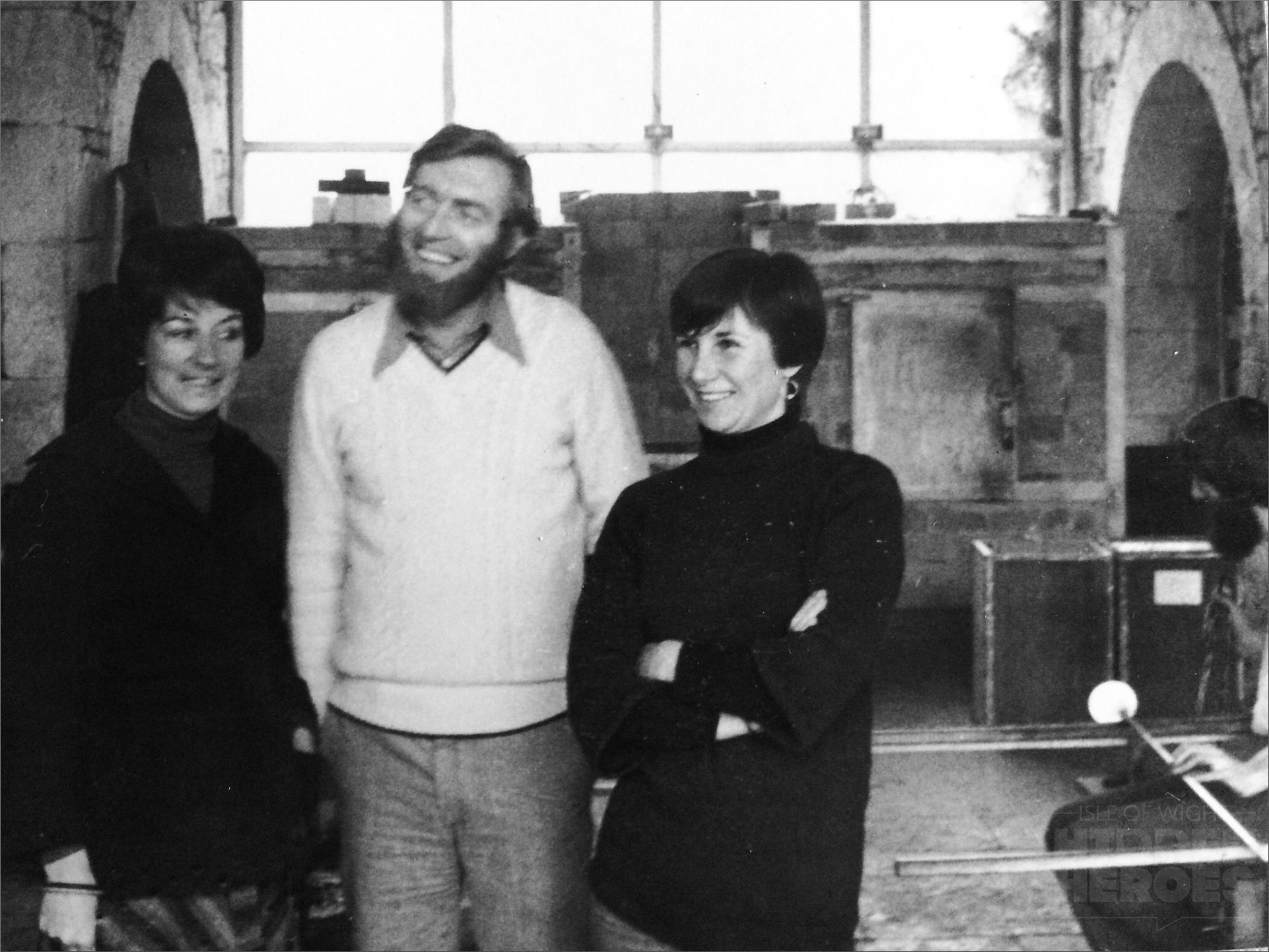 Mike and his wife, Liz (left) around 1967 when he was head of the glass dept at Royal College of Art. Pauline Solven (right) was one of the early studio glass-makers 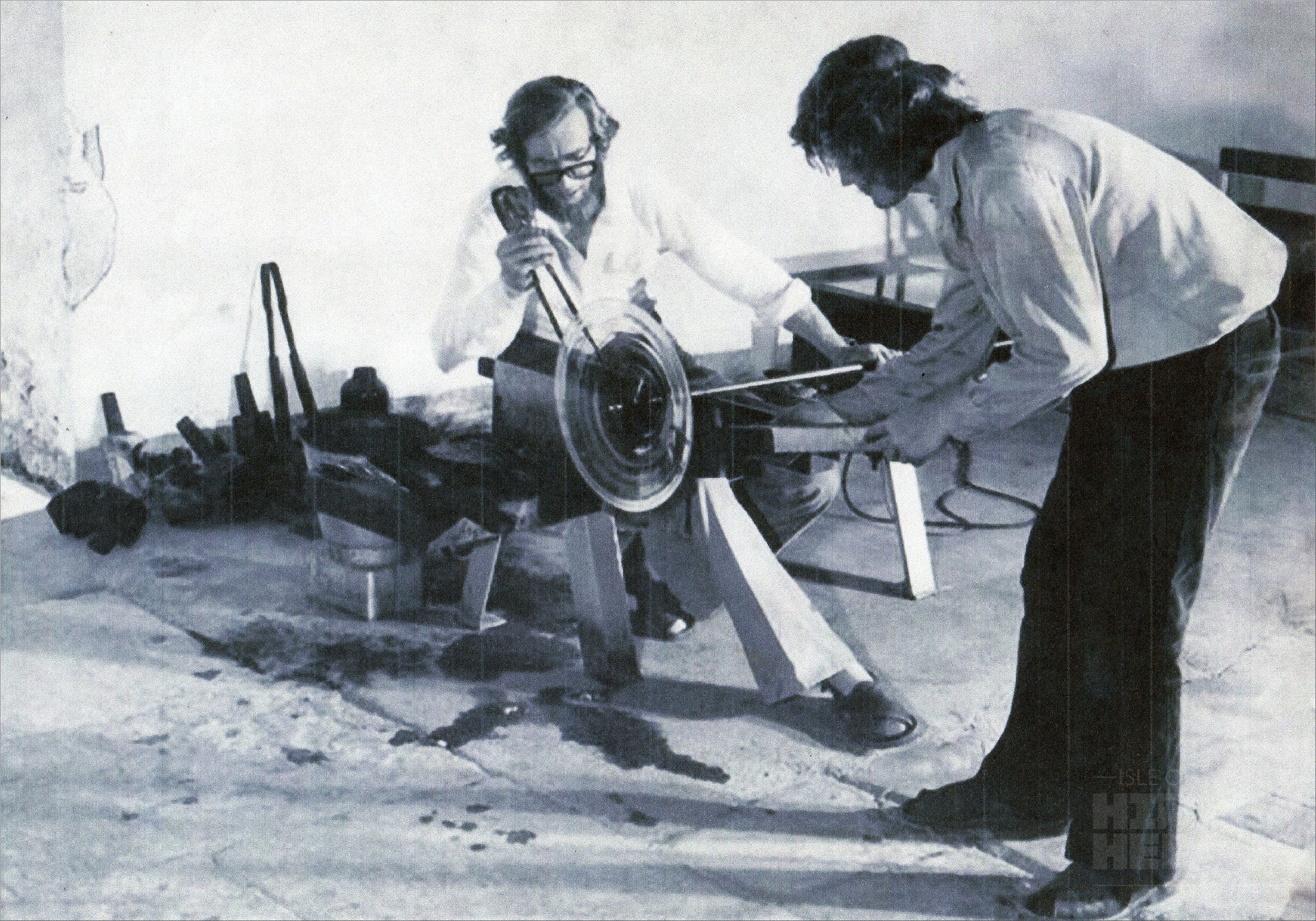 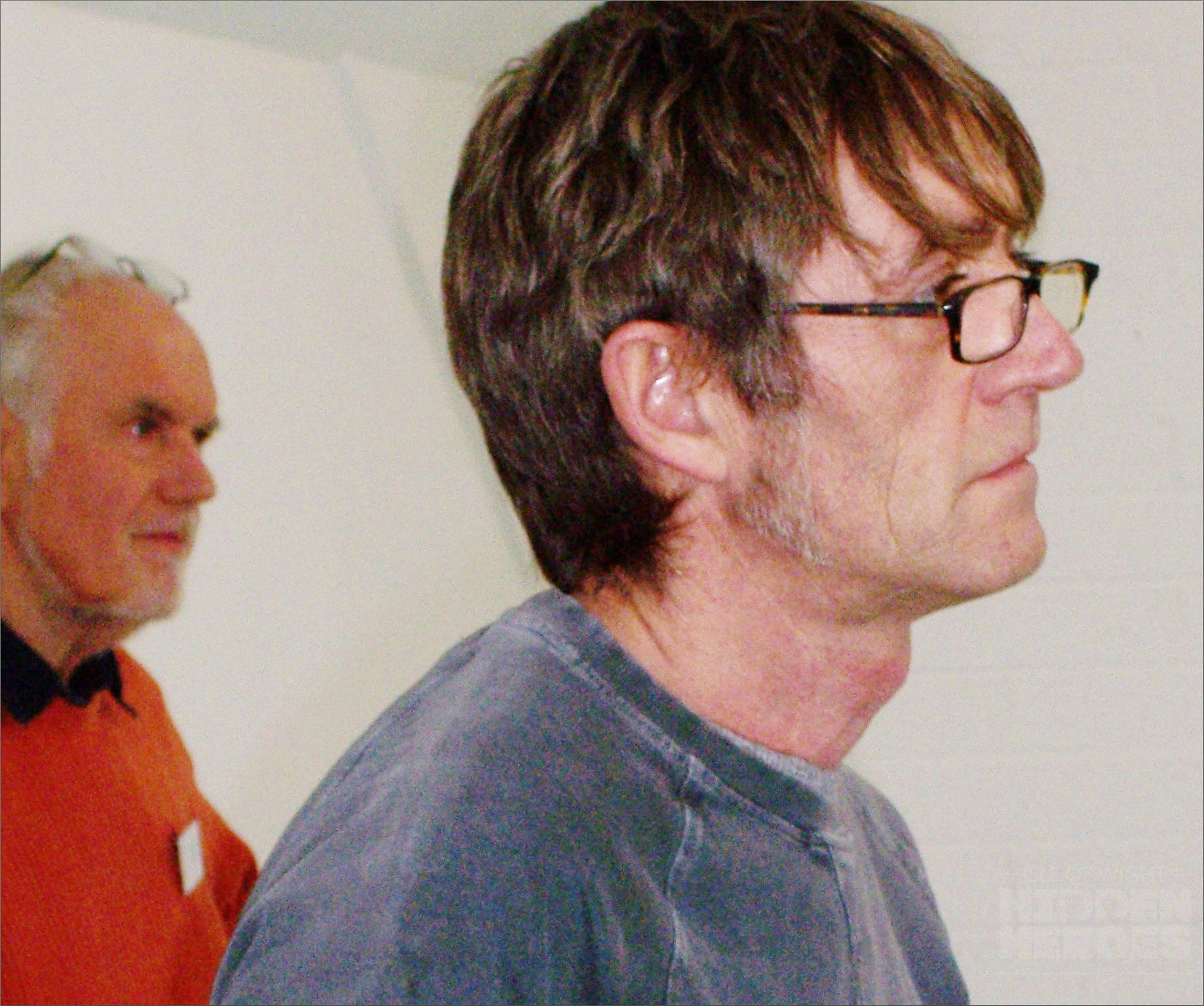 Tim Harris listening to a presentation with Richard Harris 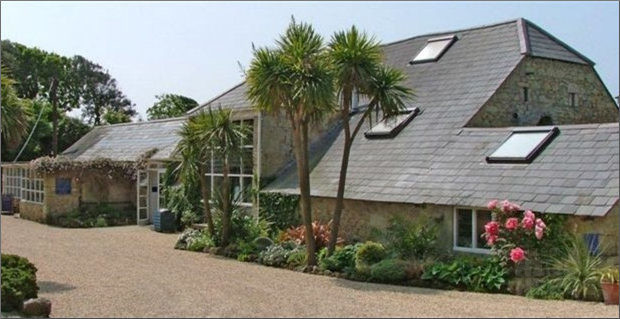 Original studio at St.Lawrence, on the Twinings estate, converted by Mike Harris, with a house adjoining, from a farm cow stable. Later in 1977 it gained an IW Preservation award. 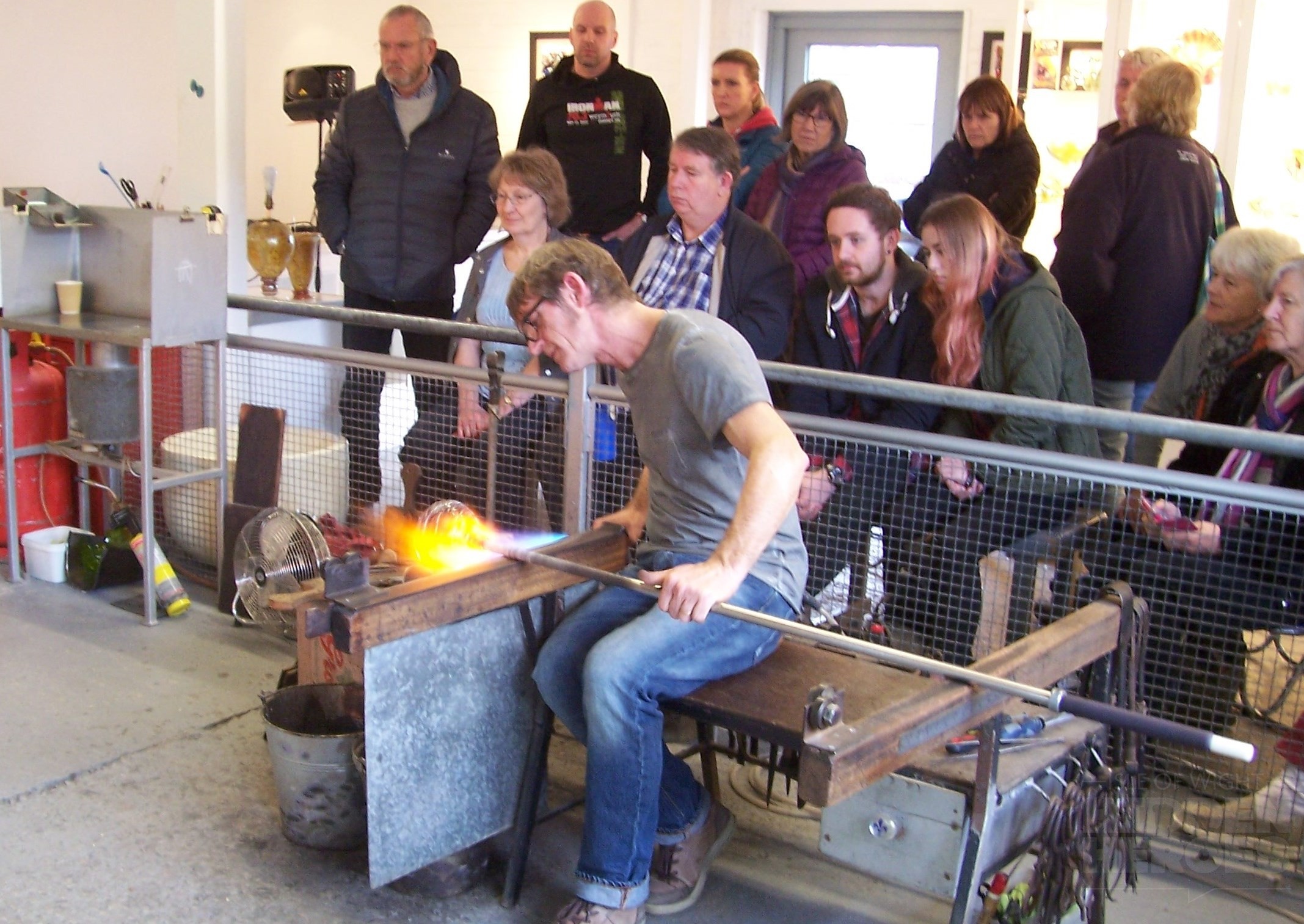 Tim at the glassmaker's chair on Collectors Studio Day 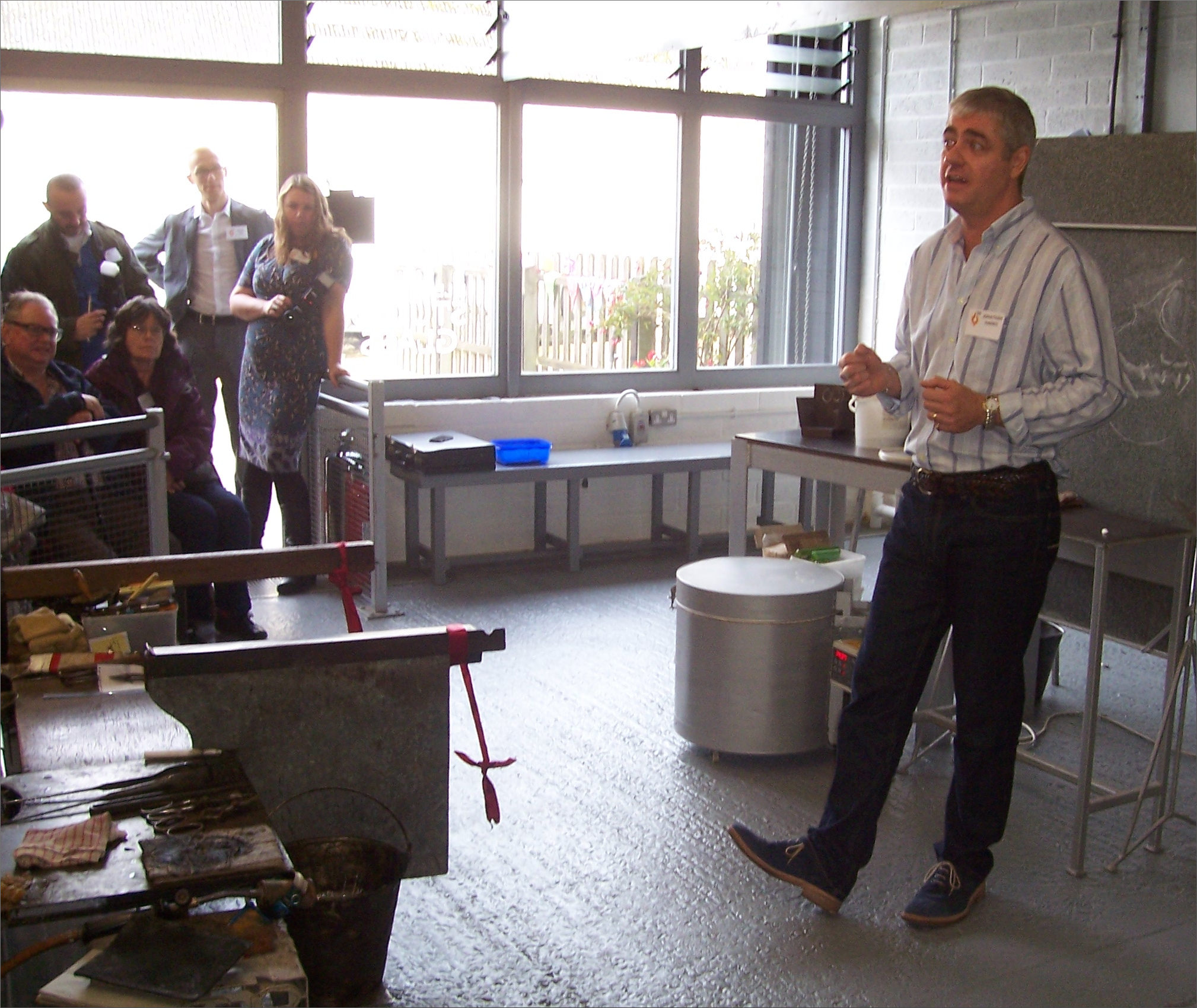 Mike and Liz's son, Jonathan, who has received worldwide acclaim with his very special Cameo designs in glass 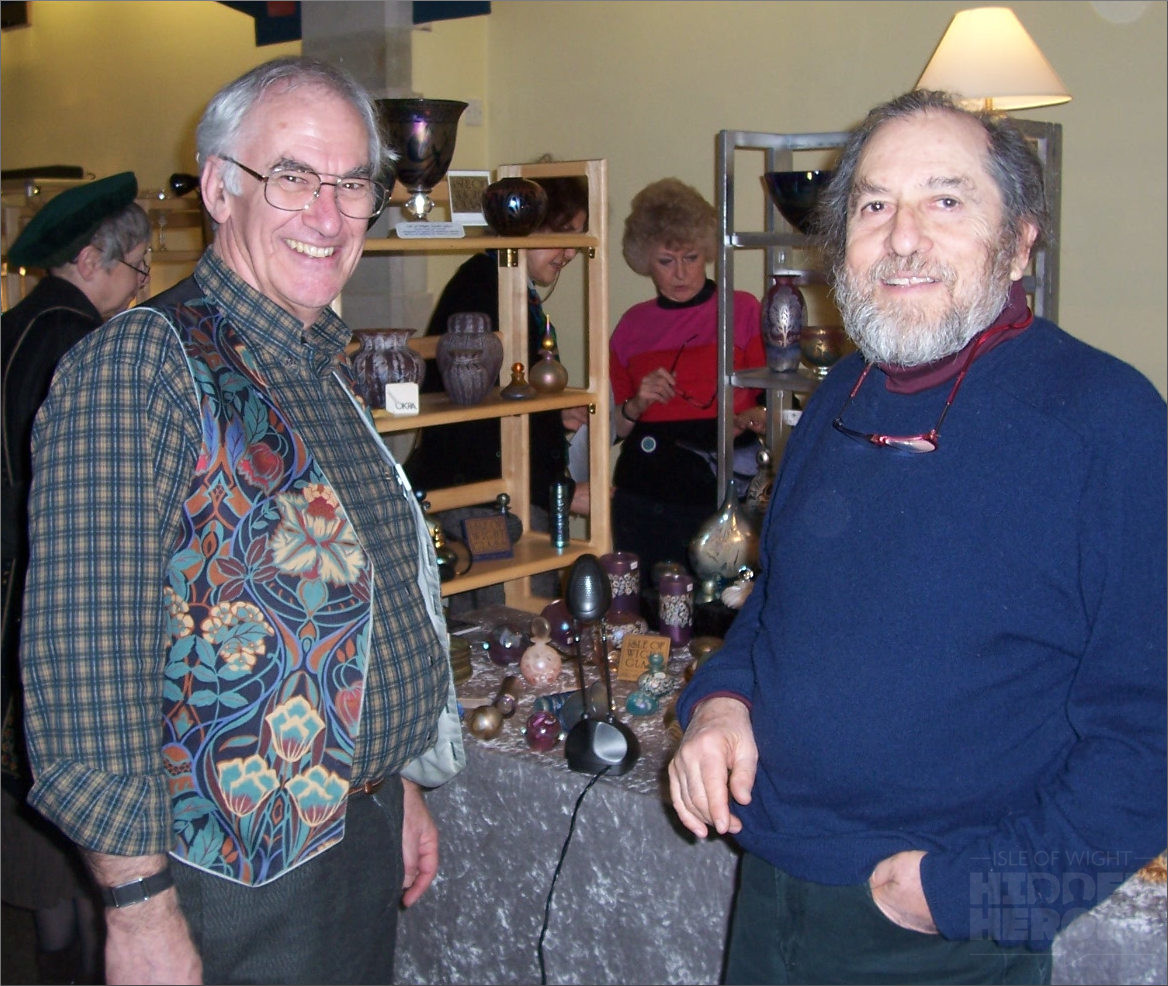 Sam Herman (on the right), the American who introduced Mike Harris to the Studio Glass making principals, with this article’s author Ron Wheeler at Cambridge Glass Fair