John Dennett (1780-1852) was a member of a well-established Carisbrooke family whose lifelong fascination with rockets led him to develop a life-saving rocket propelled device.

Describing himself as an engineer and surveyor, John is believed to have been involved in manufacturing military rockets during the Napoleonic Wars. However he later turned his skills to developing a rocket which could fire a line over to a ship in distress.

'Rocket man'
In 1826 a naval report following a demonstration of John’s rocket stated that they “will answer every intended purpose in case of shipwreck”. This positive review let to the establishment of three rocket stations - at Freshwater, Atherfield and St Lawrence.

Just a few years later in 1832 a Dennett rocket from the station at Atherfield rescued 19 survivors from the wreck of the Bainbridge. The incident got national coverage and resulted in a contract of £300 a year for the rocket’s use by coastguards. The future Queen Victoria was even given a demonstration during a visit to St Lawrence.

All weather rocket
The Dennett rocket had many advantages over the mortars that had come before it. The rocket was shaped like a large firework, but instead of having a paper case it had an iron one, which meant it could be used in all weathers.

It was also light enough to be carried easily by two men, meaning it could be moved from the rocket station to the scene of the rescue quickly over rocky cliffs and beaches. It could be fired up to 230 meters away and also had a bright trail when launched which could be seen from miles away.

Although other rockets were developed Dennett’s was still in use as late as 1890, when it was used to rescue 36 from the wreck of the Irex in Scratchells Bay, with the crew hauled one by one up the 400 foot cliff.

Amateur historian
As well as being a brilliant inventor John was also a keen amateur historian and shortly before his death he was appointed as custodian of Carisbrooke Castle.

He had a fascination with the history of the castle and even lived there in the last years of his life.

Legacy carried on
John Dennett died on 10 July 1852 and his son Horatio was left with the family business. Horatio continued to manufacture his father’s rockets until other innovations in rocket science eventually outdated the Dennett rocket.

By the 1870s they were almost entirely replaced with newer models and Horatio retired the business.

Find out more
You can find out more about John Dennett at the Museum of Island History exhibition on until 30th June 2018 as well as at Carisbrooke Castle Museum.

Find out more
You can find out more about John Dennett at the Museum of Island History exhibition on until 30th June 2018 as well as at Carisbrooke Castle Museum. 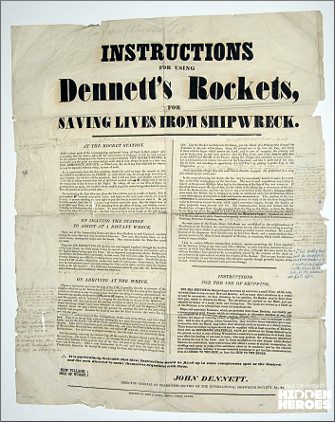