Lawrence was a truly inspirational character who lived on the Isle of Wight in his later years.

Born in Baltimore, Maryland, USA, Lawrence Holofcener served in the United States Air Force towards the end of the Second World War.

He met Jerry Bock at the University of Wisconsin, with whom he wrote songs and Broadway scores. As an actor he performed on Broadway with Carol Channing and Ginger Rogers and appeared in films.

Hugely talented
Became better known in his later years as the self-taught sculptor. His first exhibition was in 1979.

Lawrence was responsible for 'Allies', a life-size bronze of Winston Churchill chatting with Franklin D. Roosevelt on a park bench (Bond Street, London).

He also undertook a major series of sculptures celebrating the contributions made by 20th Century Icons, including Einstein, Kennedy, Mandela, Mother Teresa and Anne Frank.

Inspirational character
Lawrence Holofcener inspired many people whilst he lived on the Isle of Wight and had an infectious passion for life.

The poet, lyricist, playwright, novelist, actor and director sadly passed away on 4th March 2017, just a week after celebrating his 91st birthday.

Image: © With kind permission of Growing Bolder - taken when Lawrence was 85.

Find out more
You can find out more about Lawrence Holofcener at the Museum of Island History exhibition from 2nd January-30th June 2018.

Find out more
You can find out more about Lawrence Holofcener at the Museum of Island History exhibition from 2nd January-30th June 2018. 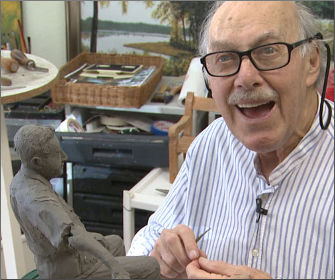 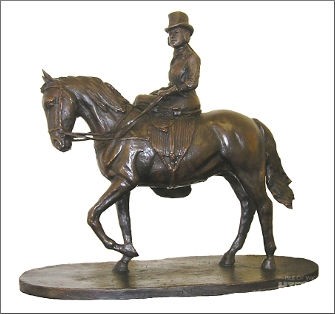 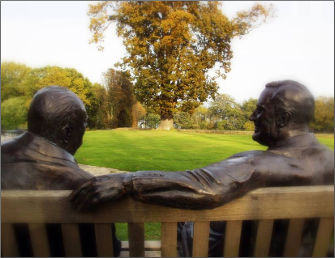