Carisbrooke Castle Museum is an Accredited local history museum run by an independent Charitable Trust, sited within a medieval castle in the care of English Heritage. It was founded in 1898 by HRH Princess Beatrice, Queen Victoria’s youngest daughter, as a memorial to her husband, Prince Henry of Battenberg. 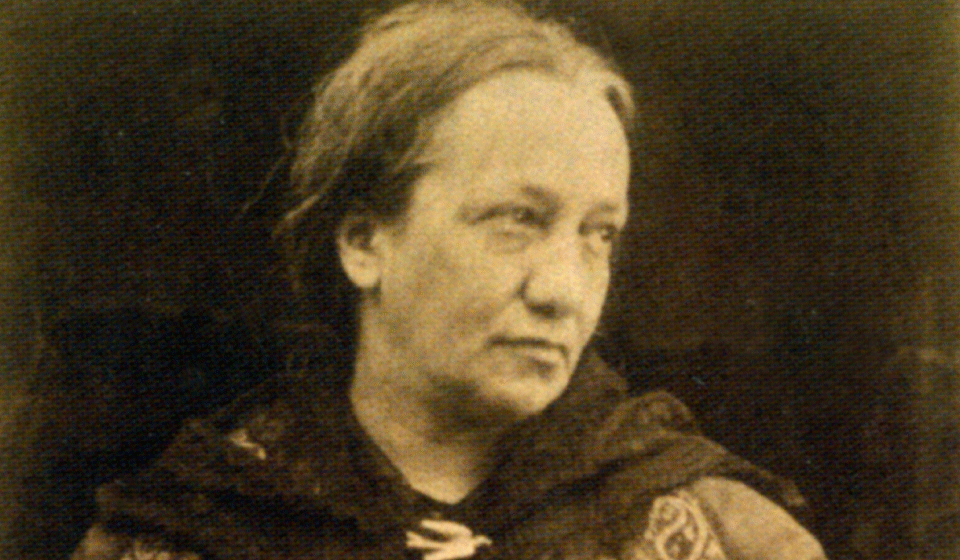 Receiving her first camera at the age of 48 – a present from her daughter to amuse herself with after moving to the Isle of Wight from London – who could have known that this mother of five would have such an impact on photography and still be revered a hundred and fifty years later?

In a scene once dominated by men, Julia Margaret Cameron was responsible for turning photography into an art form, experimenting with soft focus and pioneering the first photographic close-up portraits.

She went on to inspire generations of photographers, and to this day, exhibitions of her work attract photography disciples from around the world.

What made Julia’s work so special?
There really was something very special about her work – which is probably why it can still be found in many international major archives.

Julia had a clear vision of what she wanted to create. In a letter to Sir Henry Cole – the founding director of the Victoria & Albert Museum – she wrote in 1866 that she wanted her work to “electrify you with delight and startle the world”.

It took many hours, many sittings and many different models, but the end result was a style that is to this day still admired and appreciated. In fact, a hundred years and ten years after Julia’s first exhibition – the iconic American photographer, Imogen Cunningham, said,

“I’d like to see portrait photography go right back to Julia Margaret Cameron. I don’t think there’s anyone better.”

Insta!
Long before the introduction of Instagram filters to add effects to photos, Julia would include imperfections such as fingerprints and streaks.

Those who chose to criticise her work claimed this was due to her technical inadequacies or the damp climate, but many artists – particularly the Pre-Raphaelites – saw her work for what it was … pure beauty.

“I longed to arrest all the beauty that came before me and at length the longing has been satisfied.”

Risky business
Getting into photography in the 1860s was a risky business. The equipment was heavy and cumbersome. Photographs were developed from glass plates using hazardous chemicals such as silver nitrate – which indelibly stained countless tablecloths as Julia rushed into the dining room with wet pictures to excitedly show her husband.

Within just one year of opening that very special present from her daughter, Julia was a member of the Photographic Societies of London and Scotland.

Matt or glossy?
Remember when the assistant in the local camera shop asked whether you wanted your holiday snaps printed in matt or glossy finish? Well, as far back as the 1860s Julia had very clear views on what was acceptable.

“For anything so delicate as a portrait, the shining glazed surface destroys the pleasure by giving a sticking plaster look and I think that even in oil paintings any thick coating of Varnish is a great injury to the effect.

“It is the dull quiet surface of a photograph, however rich in tone and tint it may be, that constitutes, I think, the harmony of the work.”

Why the Isle of Wight?
This pioneering and inspirational artist created most of her photography right here on the Isle of Wight at Dimbola Lodge. She moved to Freshwater after visiting friend and poet, Alfred Lord Tennyson, in 1860 (If you didn’t already know, Tennyson lived a little further along the lane at Farringford – recently restored and open to the public).

Julia was so taken with the Island she made Dimbola Lodge her family home – naming it after the beloved Dimbula plantation in Ceylon (pronounced Dim-boola or Dim-bolla depending on who you speak to).

The property now houses the Dimbola Museum and Galleries, with permanent displays and visiting exhibitions from the likes of Annie Leibovitz and Wayne Levin.

In 1875, Julia and her husband moved to Ceylon (now Sri Lanka) and she passed away just a few years later. She’s thought to have died having nursed her son through an illness and some people have speculated that her health had been affected by the chemicals used in her photography. Her husband, Charles, passed away a year later.

The Isle of Wight has always been recognised as one of the best places in Europe to find dinosaur bones because of its diverse geology and abundance of fossils. In fact, several new fossils of dinosaurs, around 120 millions years old, were first found here and some are unique to the Island. Not many people know the man who found most of those dinosaur fossils and had several named after him, lived and worked on the Island during the 19th century.

His name was Reverend William D Fox and when he wasn’t helping the local vicar he spent much of his days hunting for what he referred to as ‘old dragons’ on the beaches of the Isle of Wight.

Fox arrived on the Island in 1862 aged 43 to assist the local vicar of St Mary the Virgin church in Brighstone (known as Brixton at the time). The Reverend Fox soon became notorious in the area, although not for his religious work. His real passion was fossils, which he looked for on his regular walks along Brighstone Bay. Tales even told of him going out on his donkey to look for them!

Finding New Dragons on the Beach
Fox wasn’t a professional scientist, but probably history’s best example of a very knowledgeable amateur fossil collector. Over the years, his daily excursions along the cliff paths and beaches of West Wight, including Barnes Chine and Cowleaze Chine, yielded many significant new fossil finds including Polacanthus foxii (a spiky-backed, armoured herbivore), Aristosuchus (meaning ‘superior crocodile’, a small bipedal carnivore) and Hypsilophodon foxii (a fast, bipedal herbivore with a sharp beak).

Fox was not the first to find a Hypsilophodon fossil, as it was later identified. The first specimen fossil was discovered along Cowleaze Chine and passed onto another professional palaeontologist called Gideon Mantell. He incorrectly thought it was a juvenile iguanodon.

However, the keen-eyed Fox found another similar fossil and, after studying it carefully, wrote to his friend, the scientist and palaeontologist, Richard Owen, suggesting that he believed the specimen showed significant differences to iguanodon. When Owen later investigated the find he realised Fox was indeed correct – it was a new species of dinosaur.

The fossil was later described and named in honour of Fox’s contribution, Hypsilophodon foxii.

Bones First, Parish Next
There was no doubt about Fox’s passion for palaeontology during the first golden age of fossil collecting. The vicar’s wife said of him, ‘It was always the bones first and the parish next’ so it must have been deeply disappointing when the church asked Fox to move on from the parish of Brighstone.

He even wrote several letters to Richard Owen asking for his help in seeking a permanent position, writing ‘I cannot leave this place while I have any money left to live on,’ and concluded that he took deep pleasure in ‘hunting for old dragons.’ Sadly, in spite of Owen writing to Gladstone, the prime minister of the time, asking if he could influence the church, Fox eventually had to leave the parish of Brighstone, but he continued to collect fossils, even after moving to nearby Shorwell.

Fossilised Legacy
Fox died on the Island and is buried in the graveyard at St Mary’s Church, Brighstone. In 1882, his incredible collection of fossilised specimens was donated to what would become known as The Natural History Museum, and is still studied by paleontologists today.

But Fox’s most lasting legacy is surely in showing the world how amateur fossil collecting is so important to our knowledge and understanding of dinosaurs. I’m sure Fox would delight in knowing that new ‘old dragons’ continue to be discovered every day, by ordinary people on the Isle of Wight, just as Fox had done in his day.

Why is he a hero?
Rev William D Fox’s amateur contribution to palaeontology is unrivaled. He discovered more species of dinosaur than anybody else in the UK and has more dinosaurs named after him than any other Englishman.

His legacy of fossil collecting, over 500 fossils, were donated to the Natural History Museum and are still used today for study and reference.

Most importantly, Fox showed the importance of amateur fossil hunting and collecting which is still important now and accessible to all — amazing new fossil discoveries are being found every day on the Isle of Wight.