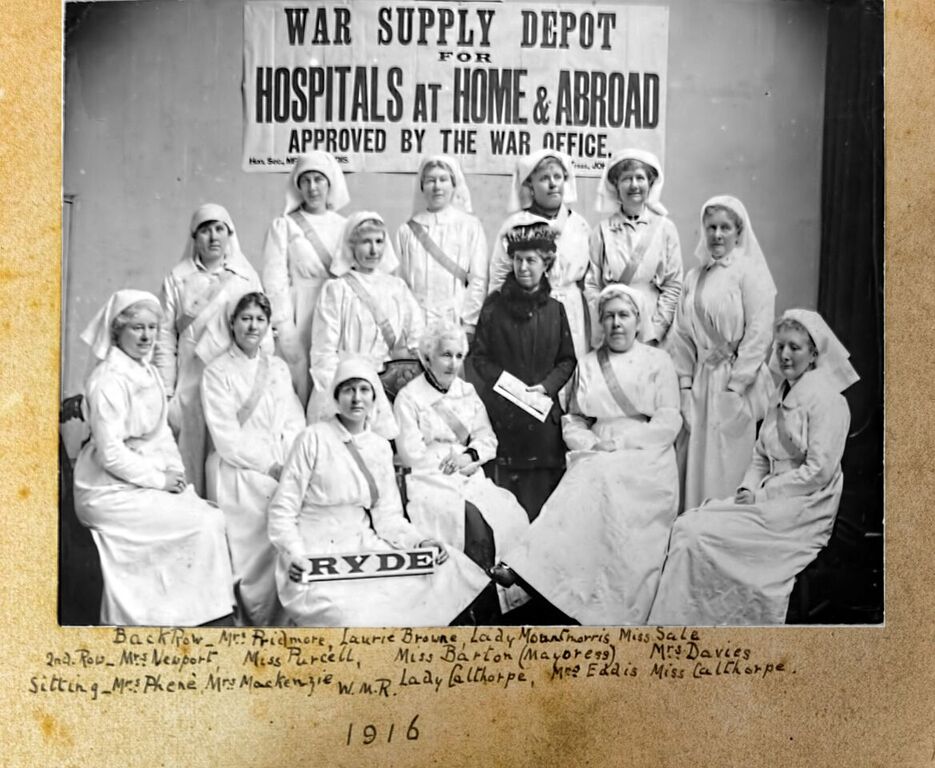 Did you know that Carisbrooke Castle Museum holds regular talks all through the winter?

20th November will see David Langford and Lin Watterson talking on two aspects of the war which involved activities hidden from the public eye: The life of a local man who rose to a position of vital importance in the Middle East, but acted in secrecy; and back in this country, we learn about women who worked hard behind the scenes to support the troops.

On 18th December, Justin Smith and Virgil Philpott (aka ‘The Dollymopps’) introduce us to some of the most interesting characters they have encountered during a decade of researching the Island’s musical traditions.

Where and when
All are welcome to the illustrated talks which take place on a Tuesday between 2-4pm at the Museum.

Tickets are £8, including tea, coffee and biscuits.

See our What’s On Section for more details of other upcoming talks.

On Sunday 14th October (10am til 4pm) Dinosaur Isle will be hosting Discovery Bay, an event for Biology Week & Earth Sciences Week.

Become a Bayologist and celebrate National Biology Week and Earth Science Week with a day stuffed full of life science activities for all ages.

Try out the powerful microscopes, sieve for life in the soil, fire up the mighty bug hoover, dip for pondlife and fill up our wildlife aquarium, and marvel at the mole-in-a-jar!

It’s a free event and sounds like lots of fun, so tell your friends and family to head to Dinosaur Isle between 10am-4pm on Sunday 14th October.

You can visit this fantastic museum and see all their latest exhibitions for just £2! (Don’t forget to take proof of Island address).

There’s always lots to see and when you’ve finished looking around the galleries, head down to the cafe for a great selection of tea and cakes.

The 26th Richard Hutchings Lecture
Coming up in a couple of weeks, Isle of Wight historian, John Medland – who some of you may have heard talking about Isle of Wight Hidden Heroes

earlier this year – will be giving the 26th Richard Hutchings Lecture.

John will be sharing the adventures of two Freshwater naturalists, father and son, James and Henry Roberts, who went on an extraordinary trip to Brazil in 1869-71.

The talk takes place in Julia’s Tearoom at Dimbola at 4pm on Friday 12th October. Donations to the Julia Margaret Cameron Trust will be appreciated. 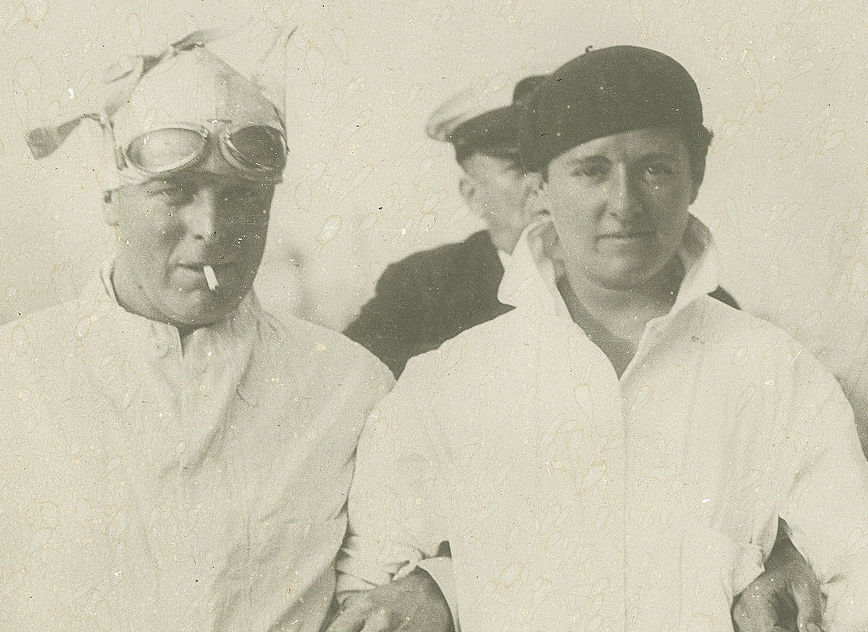 This Saturday (22nd September) is your last chance to see the brilliant Isle of Wight Hidden Heroes exhibition at the Classic Boat Museum Gallery in East Cowes.

Ever since the waters rose and created the Isle of Wight, Islanders have depended on the sea for food, transport, defence and leisure.

Of the many maritime heroes linked to the Island, the Classic Boat Museum’s exhibition celebrates less well-known individuals who have made a significant impact on the maritime heritage of the Island.

The Galley on Columbine Road, East Cowes will be open this Friday and Saturday between 10am – 3.30pm. Some fantastic research work was carried out to pull the Hidden Heroes exhibition together, and it’s well worth a look before it goes.

The Boat Museum’s Hidden Heroes exhibition will be making way for a new exhibition opening on 20th October about WWI. More details of that to follow.

This Saturday you can walk in the footsteps of one of our Isle of Wight Hidden Heroes, dinosaur hunter, Rev William Fox.

Meet at Dinosaur Isle for a 10am start of a two hour walk along the surf-line to Culver Cliff foreshore, returning along the upper foreshore.

Learn about the different environments recorded in the geology of the cliffs over a 40 million year time span.

Organisers advise taking along a drink, chocolate or other supplies.

An important part of the Isle of Wight Hidden Heroes Project (kindly funded by Arts Council England) was to open up the Island’s museums and galleries to a wider audience – To be able to reach those who might not have stepped inside a museum since their childhood, or perhaps those who are unsure of what they might find behind the imposing entrance doors.

Thanks to the wonders of 360 degree photography, we’re now able to provide virtual tours of many of the participating venues – with more being added in the next few weeks.

How to use it
Taking a tour is as easy as using Google Streetview. Click into the photo, hold and move around looking up down and around.

Click on the large arrows to navigate through the venues. Some are on several floors, which you’ll see indicated on the right-hand side of the screen (1st and Gnd).

We hope you enjoy the tours.

If you were lucky enough to make it along to the major Isle of Wight Hidden Heroes exhibition at Quay Arts earlier this year,King Arwald at Quay Arts you’ll have seen the very striking artwork by Island artist, Nigel George, created in response to our Hidden Hero, King Arwald.

We absolutely loved this artwork, not simply because of how it looked (which is fabulous), but because of how it was created – using the latest 3D modelling technology, some old newspapers and blue slipper clay.

Well, you’ll be pleased to hear that King Arwald was not packed away in a dark and dusty corner, but has found a welcoming new home at the excellent Newport Roman Villa. You can pop along now to see Arwald sitting among his Roman peers.

Archaeology Day
If you wait until Saturday 28th July, you can also take part in the Archaeology Day event at Newport Roman Villa.

This is a free, entry-drop in event running between 11am and 3pm. Take along your archaeological finds along to be identified and meet expert archaeologist, Frank Basford, from the Portable Antiquities Scheme. Frank has a wealth of knowledge and experience and really knows his stuff!

There’ll be plenty of fun for families too, with sand pit excavations and even a photo hunt.

The fantastic Ferry Lights artwork by artist, Deborah Davies (Dd), commissioned for the Isle of Wight Hidden Heroes exhibition, is picking up new fans in London.

The interactive artwork – that tracks the movement of the ferries and hovercraft across the Solent – was designed and built in response to our very own Isle of Wight Hidden Hero, Andy Stanford Clark.

The artwork is now based in IBM’s Client Centre on London’s Southbank.

Read more about the installation over at News OnTheWight.

In the United States they celebrate National Maritime Day on 22nd May 2018.

The national holiday was created to recognise the birth of the maritime industry – marking the date in 1819 when American steamship, Savannah, set sail from Georgia on the first ever transoceanic voyage under steam power.

Here on the Isle of Wight we’ve had plenty of American sailors and powerboat racers pass through, many of them having an impact on the boat-building industry.

‘Fastest woman on the water’
If you are familiar with our Isle of Wight Hidden Heroes, you’ll know all about Marion ‘Joe’ Carstairs – the openly gay, female powerboat racer – who came to the Isle of Wight to take part in powerboat racing in the 1920s.

When she arrived on the Isle of Wight, Joe commissioned Sammy Saunders to build her a powerboat.

She went on to set up her own boat yard on the River Medina, Sylvia Yard, employing Islanders to work on the design, build and testing of her sleek powerboats.

Find out more
What better day to visit the visiting the Classic Boat Museum Gallery, where you can find out more about ‘Joe’ Carstairs.

The Classic Boat Museum Gallery is open Tuesdays, Wednesdays, Fridays and Saturdays 10am – 3.30pm and can be found in the Columbine Building, Columbine Road, East Cowes. 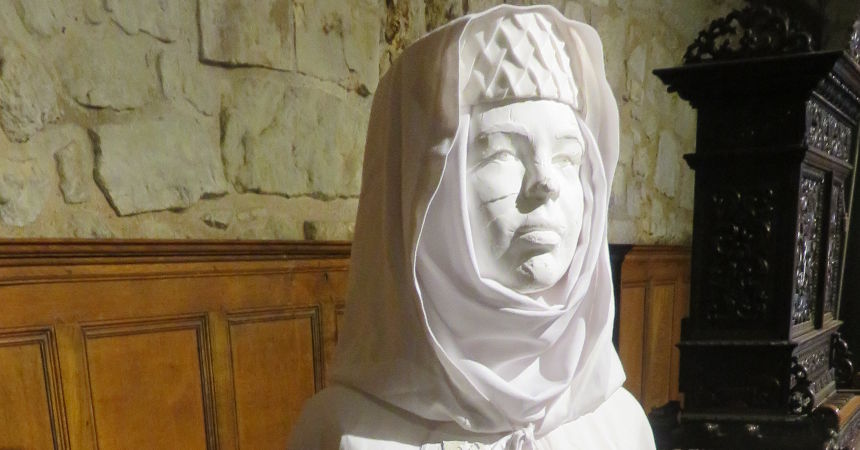 We’re very excited to see that one of our favourite Isle of Wight Hidden Heroes is making a return visit to her former home.

‘Lady of the Isle’, Isabella de Fortibus, was forced to sell the Isle of Wight on her deathbed in 1293. Until now, the only representation of Isabella at Carisbrooke Castle Museum (where she once lived) were photographs of a stone bust and a re-enactment during the Victorian period. 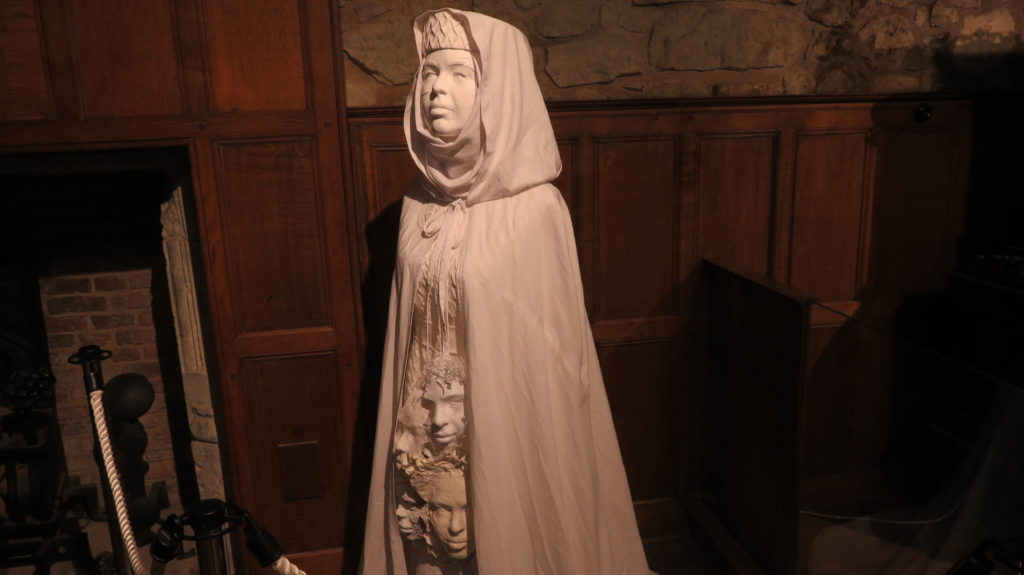 Isabella on tour
However, thanks to Isle of Wight artist, Hannah George, you can now see Isabella at the Museum.

Hannah was commissioned to create a piece of artwork for the major Isle of Wight Hidden Heroes exhibition at Quay Arts earlier this year.

Her response as an artist to Isabella’s story was outstanding.

Why is she back at the Castle?
When the Quay Arts exhibition ended in March, Hannah got in touch with the Manager of Carisbrooke Castle Museum (which, by the way, has no connection to English Heritage who own the Castle itself) to see whether they would like to display her Isabella.

“It seemed a shame to dismantle Isabella and not give her a second outing.”

Not surprisingly, the Castle Museum were delighted to find a home for Isabella. Hannah continued,

“I was really excited to take Isabella back to her home! We chose a spot by a big fireplace and the dark wooden and brick surround really makes the whiteness of her cloak, head and child faces stand out.

“As you enter the room you see her from the back and it’s actually quite a ghostly sight now.

“The fragmentary nature of her face, made from scraps of blank white paper was to hint to the fact that we actually know very little about her and must build up a picture of her life and of her qualities as a person from the scraps of information we can find out.

“We must project our own colours onto her through our own particular contemporary eyes.”

If you haven’t seen Isabella now back in her home at Carisbrooke Castle Museum, do pop along, she looks magnificent. Our thanks to Museum volunteer, Charlotte Reynolds, for use of her photographs. 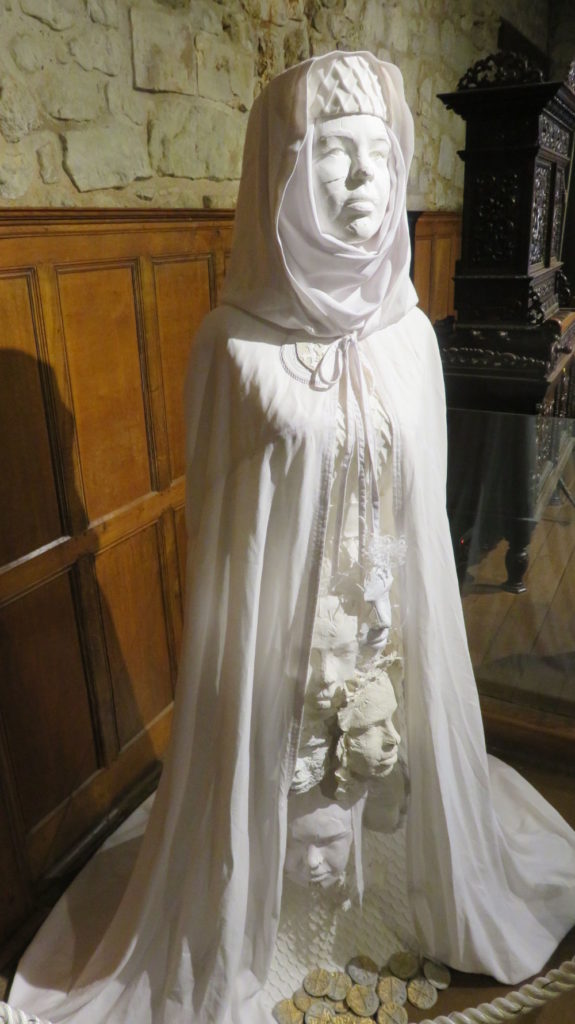 Check back in the future for more details about how Hannah created Isabella.